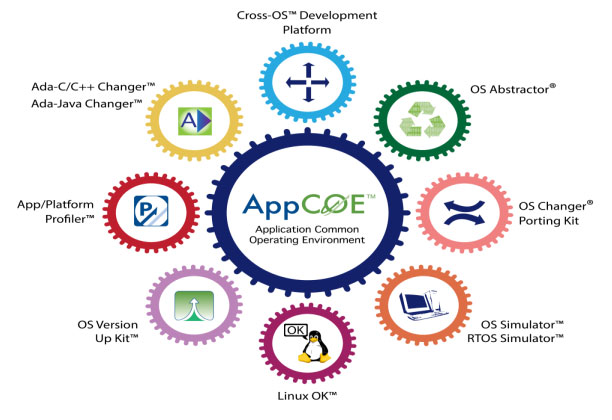 Rapid Software Reuse on any Operating System with Performance Optimization

OS Changer® is a C/C++ source-level virtualization technology that allows you to easily re-use your software developed for VxWorks®, pSOS®, Linux/POSIX, Windows®, Nucleus®, ThreadX® and μITRON on another OS, while providing real-time performance. It eliminates the manual porting effort, saves money and shortens the time to market. The appropriate OS Changer Interface connects to your existing application that was developed on your current OS while the OS Abstractor® Target Specific Module (specific to your target OS) provides the connection to the OS you are moving to. 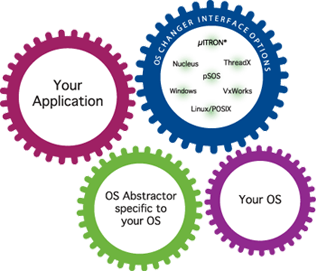 Why Change Your OS?

Develop Once to Deploy on Multiple Platforms with Ease

Cross-OS Development Platform™ is a C/C++ source-level virtualization technology that provides a robust and industry standard OS interface architecture for flexible real-time application development, while allowing the user to protect the software from being locked to one OS. This negates future porting issues because the software will support multiple operating systems and versions from the beginning. It also eliminates the risk associated with the OS selection process, since the same application can be tested on multiple platforms for comparison and won’t be tied to the chosen OS. 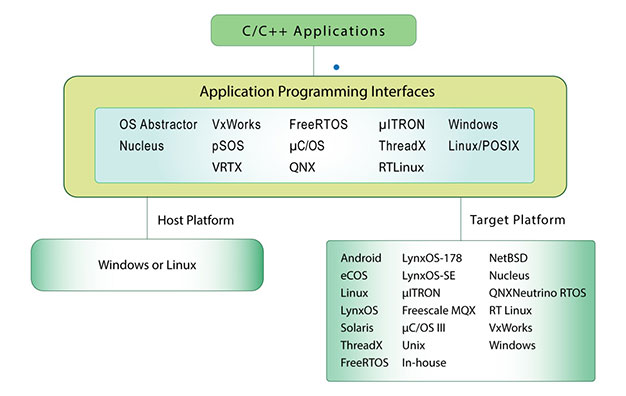 Separates The Code From The OS & Hardware Platform

Develop and Test on a Virtualized Host without the Target Hardware

MapuSoft’s OS Simulator™ allows engineers to develop and test embedded applications on Windows or Linux host environments. OS Simulator eliminates the need for the original OS, as well as the requirement for expensive target hardware during development. Without the need for those components, development and testing can begin much earlier. The result is lower licensing costs, reduced hardware requirements and a shorter time to market.

MapuSoft’s RTOS Simulator is a one-stop solution that makes all the popular RTOS platforms available to educational institutions, at a fraction of cost of a single proprietary OS. RTOS Simulator creates a development and testing environment on standard Windows/Linux personal computers. Students get hands-on experience developing real-world embedded software applications, improving their post-education marketability. Many students who have mastered embedded software development, now have lucrative jobs in a variety of industries, such as Mil-Aero, Electronics, Medical, Automotive, Telecommunication and many more. 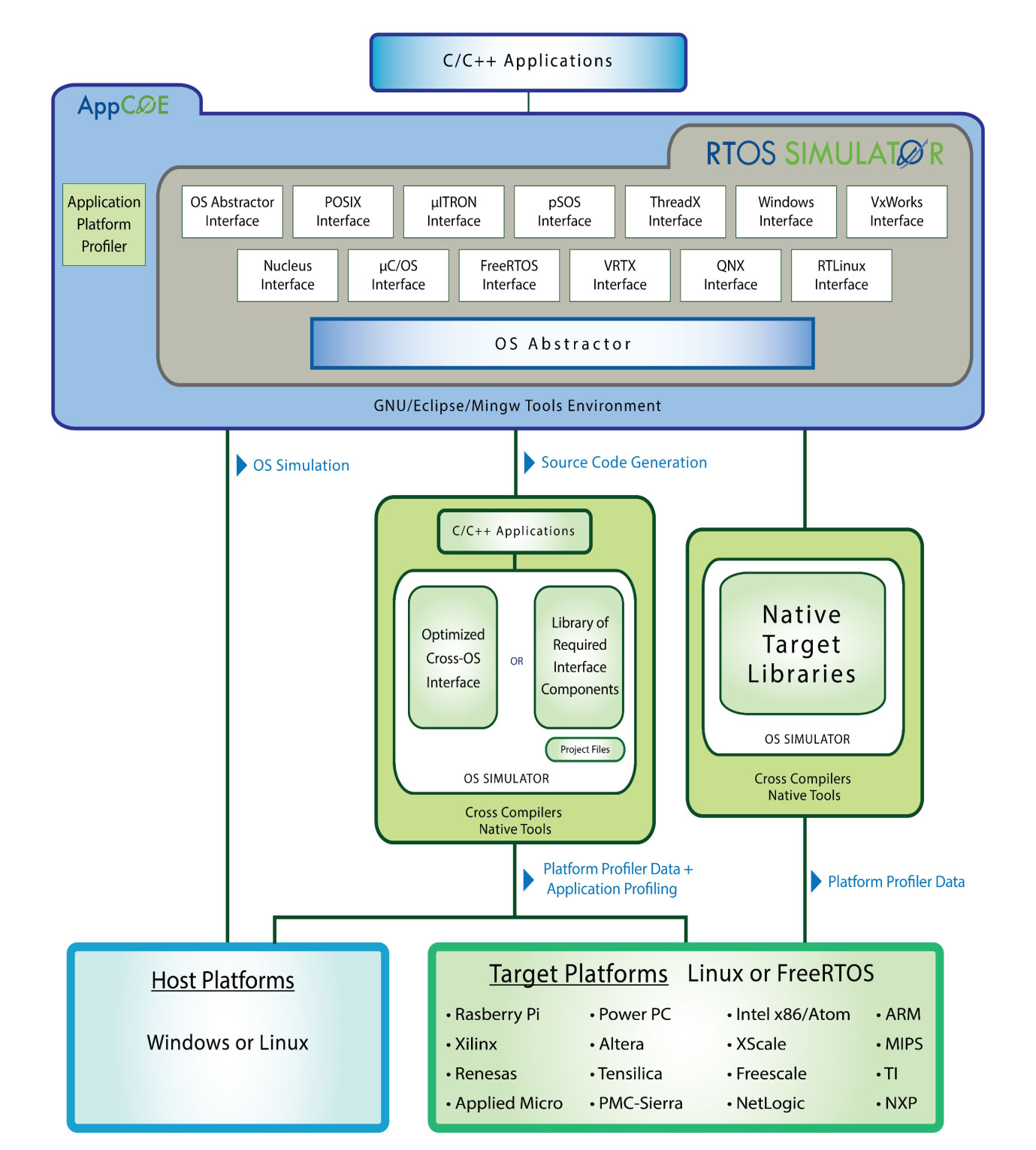 A typical hypervisor allows for running applications on multiple operating systems on a single hardware platform. Cross-OS Hypervisor™ is a next-generation hypervisor that eliminates the need for multiple operating systems by providing the OS functionalities required by the applications. This design ensures that applications are not locked into a particular OS platform and also simplifies development, reduces bill-of-material costs, and utilizes the system resources more effectively. 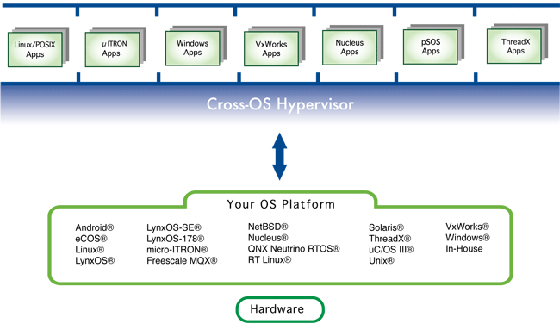 Developers are feeling additional pressure to get a performance increase from their embedded Linux due to increased real-time demands on applications, while having limited resources on their existing target hardware platform. To achieve additional performance, they will need to dig into the Linux operating system code to re-build the kernel and spend a considerable amount of time re-designing the application to improve performance.

The Linux Optimization Kit provides header files and template code to re-direct the application to use the Linux OK interfaces. It also generates optimized interface code, based on the level of individual API usage in the application, and according to GUI settings input by the user which captures resource requirements and target environment settings. Linux OK improves application performance by reducing run-time creation and deletion of OS resources by pooling and reusing them across applications/processes. Linux OK also reduces unnecessary task and user/kernel mode switching. 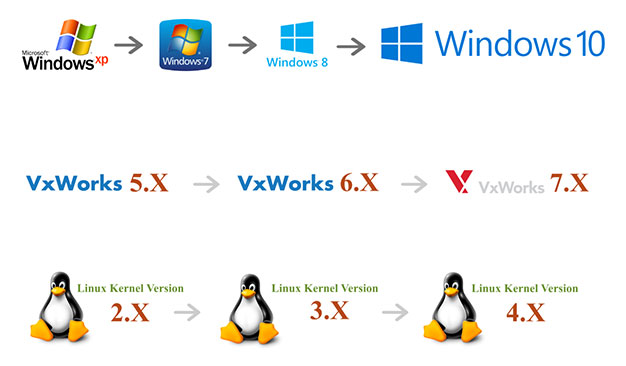 Automated Code-Changer converts the application code from over 30 programming languages into modern languages. The power of model-based automation increases efficiency and accuracy, while significantly reducing cost, errors and risk. Automated Code-Changer also has the capability to create automated documentation for either the old or new code. There is no size limit to either the code conversion or the creation of documentation.